One my overwhelming feelings in the recent lockdown, was that of nostalgia. By nature I tend to think about the past, but the never ending sense of time took me back to my school holidays in the 1970s. I started to get inspired about the mundane suburban south London life of my youth; the high street gossip of my mother, the shopkeepers and the playground rumours.

The Bride of Catford. 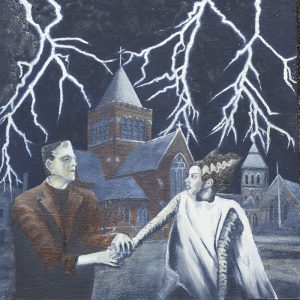 Although about aged 3 at the time I still recall this particular part of Catford, the looming old dark church opposite Timpson’s Coach Station and the drapers that still had a pulley system to send the cashiers money wizzing across wires on the ceiling. Local south Londoner Boris Karloff was born in Forest Hill and Elsa Lanchester lived in Catford; so here they meet outside the gloomy Church of St Laurence and the equally gothic town hall. 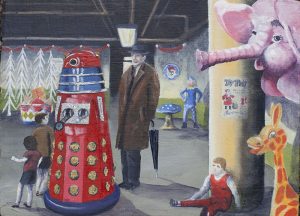 Most children growing up in south east London in the 1960s will have come across Chiesmans department store in Lewisham, with the obligatory visit to Father Christmas. My favourite part was down in the basement, seemingly full of pipes where there was the toy department and indoor amusement area, with a dalek ride you could get into.

This town wasn’t big enough for the both of us.

The playground rumour of Worsley Bridge School, Beckenham during the early 1970’s took to a new level when it was said that Los Angeles pop group, Sparks had moved in nearby. The source of the rumour also told me he has a swimming pool in this back garden with a baby shark in it, though the Sparks bit turned out to be true!

Sausage rolls; a cut above the rest. 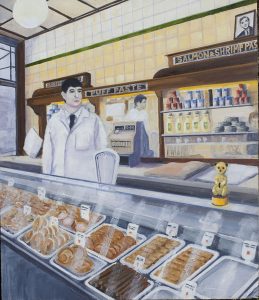 Kennedy’s were a south London chain of sausage and meat shops forever locked in time, in their 1930’s splendour. The branch in Beckenham High Street; which sold my favourite sausage rolls, was frequented by my mum who always told me that the young man who worked there cut his own hair. He certainly did, as I always thought he looked like Mr Spock from Star Trek. 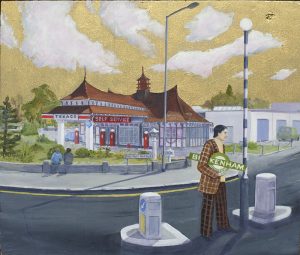 Someone once told me that, Bob Monkhouse who had once lived locally near Kelsey Park had acquired old railway memorabilia from Beckenham Junction Station.  Apparently he collected everything; so here he is, station sign in hand, not far from home by the ‘Chinese Garage’ a landmark always pointed out to me by my dad as we passed in our old Cortina.

The last days of Mr Griffiths. 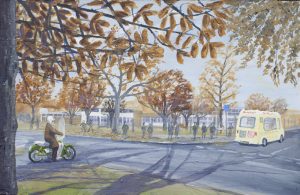 The legendary Mr Griffiths was the woodwork and craft teacher at my school and his fame came from his attitude towards the boys who he terrorised. I have never witnessed such extreme violence towards young children and am still surprised he got away with it. Years later some friends who were practicing their driving saw him, now retired sitting on his Honda Club opposite the school; just watching.

The ghosts of my life. 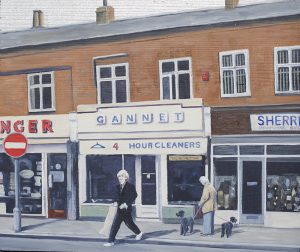 In my last year of secondary school a classmate mentioned that he’d seen the ‘bloke out of Japan’ in the dry cleaners over the weekend. Of course it was very possible as Beckenham born lead singer and victim of fashion; David Sylvian was probably visiting his Mum and Dad who lived close to Penge East station.

Dave and Ange go to Safeways.

Beckenham was blind to the up-and-coming ‘rock god’ the Bowies just being considered as local eccentrics. They seemed to like this part of the High Street, just along from the Arts Lab at the Three Tuns and over the road from the Evelyn Paget hair salon. This picture is inspired when my mum saw his wife Angie in Safeways at the cheese counter.

Fire at the Art Centre. 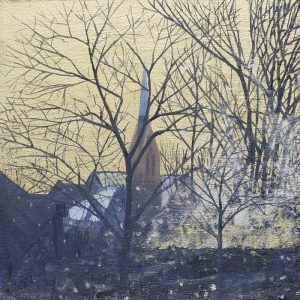 One night my dad woke us up to tell us that the Arts Centre was on fire and we should be ready to evacuate. The whole sky seemed to light up as gas cylinders started to explode. The next day our back garden was covered in a strange snow of tiny blacken pieces of canvas. 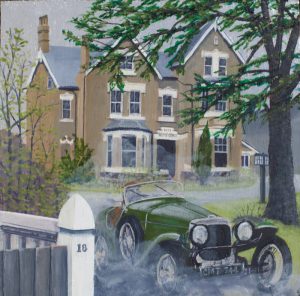 Hayne Court was a massive dilapidated Victorian mansion along the street from where we lived. Despite its size, at night it seemed to be lit by a single bare bulb in a side window, which made us think it must be haunted. The garden was an overgrown jungle and only ever visited by some naughty neighbours who let their pet gerbils run free! It was however inhabited by an eccentric gentleman called Russell-Kitchen who collected vintage cars that he kept in a massive garage at the side of the house. Occasionally he made an appearance on the road, seen through clouds of smoke accompanied by the sound of loud bangs. 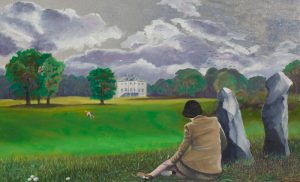 At junior school I avidly read the ‘Famous Five’ stories of Enid Blyton, unaware that she had lived in seven different houses around Beckenham for thirty years. She always reimagined the landscape for her books, so I have made Beckenham Place Park the setting of ‘Mystery Mansion’ location of the standing stones; now replaced by the marker posts between Lewisham and Beckenham. Here she sits deep in thought studiously ignoring her faithful dog Bobs! 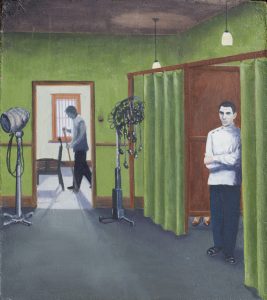 I’m not sure of the real name for the wildly out-of-date hair salon on Clock House Parade but my father always called it ‘Ernie’s’. Here in the back room I was taken for my haircut; on the single wooden barbers chair on to which a plank was put across the arms to get me up to he right height. Like many things in Beckenham during the 1970’s it was still in the 1930’s. All was very dark and dingy looking especially the front ‘Ladies’ part, looked after by Ernie’s brother who presided over the ancient equipment including a permeant waves machine. He looked like Ron Mael so this confirmed to me the playground rumour, that ‘Sparks’ really did live in Beckenham.

The man who wasn’t there

It was a normal afternoon walking home from school, going up Bridge Road, and crossing over onto Blakeney Road. Suddenly I became aware of a man walking in front of me who just seemed really weird. This section of the road was bounded on one side by a 6ft high wall separating the pavement from the railway so my mind was really focused on this man. He was attired in an old style suit, wearing a trilby hat and holding a little case. What eventually struck me after following him for a few minutes was the colour; I’d only ever seen people dressed like that in black & white films that my father watched. Then in the blink of an eye he just wasn’t there, I was startled and looked all around  but the street was totally empty. Feeling suddenly scared I ran all the way home to tell my mum I’d seen a ghost. 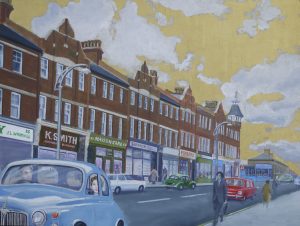 One day walking by Bourne House just down from Clockhouse Station an old Rover pulled up along side us. It was my long lost Aunty Vi, my fathers estranged elder sister, who let’s say, ‘liked the odd tipple’. Being a sort of deluded ‘Norma Desmond’, the car was driven by her husband Ken, playing the part of chauffeur, whist she sat in the back with her fur coat and pearls.

Ziggy  played guitar and bought his tights in Woolworths 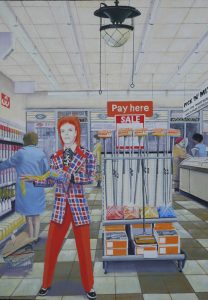 One day my mum came back from shopping down Beckenham High Street with some news. She’d bumped into David Bowie in Woolworths where he was buying himself some tights.. but you should have seen his hair! So I have him here strutting his stuff in front of the old ladies in his new Freddie Buretti gear.