An occasional postcard series showing ‘talking the talk’ and actuality superimposed on each other.

Visit Shanghai-London. The City of London by night is hardly recognisable anymore, it could be a view of a generic East Asian city.. or perhaps it is!

Panoramic View of the Thames. The developers love to sell their apartments on the views; such a shame they ruin the view for everyone else in London. Eventually as the mass of building increase their views will be of the neighbours underpants and rusting bicycle!

See London Before it Dies. A classic London view looking towards the Royal Exchange from the Poultry, but overwhelmed with skyscrapers in an era when city jobs are lost to computerisation and AI. 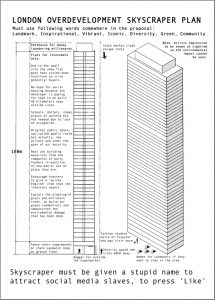 London Overdevelopment Skyscraper Plan. Oops! the architectural truth still on the drawing board.

London, A Sign of the Times.  The gentrification cliché signpost, all those harsh, but tiresome elements you expect to find in one of those 1001 ‘Secret London Places’

Shakespeare’s London. The ‘New Elizabethan Age’ finds Britain like a Shakespearean character, haunted by past ghosts; but on a World stage. Even the wind that scattered the Spanish Armada in 1588 seems to have returned on eve of Brexit, as the country voted for an uncertain future.
In this ‘Postal exhibition’, the art is sent unannounced to 44 selected people, making the viewers participants and in this age of consumerism and political uncertainty, It hopefully raises a wry smile.
The postcard highlights the disappointment of reality, in is case when you superimpose Shakespeare’s world onto our modern one. ‘Brand Britain’ revolves around history but continually destroys it in the pursuit of monetary gain. 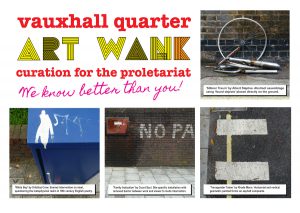 Art Wank. For those who cannot see what is there and those who see what isn’t there! Britain has always had a suspicion of art and design; the municipal love of fake Victorian street lightings shows how open minds really are. This postcard is the clash of everyday London and art world curatorial pretension, as high-end galleries move into an ordinary area, which throws up all sorts of questions.

Do everyday Londoners see, what the galleries see in the work that they sell; or are they missing something?

Is the art of the galleries any good or is like the famous children story ‘The emperor and his new clothes’?

Is the unnoticed random clutter of everyday life outside the galleries, better?

Do the masses need an arts education?

Rock & Pop Heritage of London. A great pub quiz question is, “how many London album covers can you name?” The answer will be surprisingly few, as there are less than you think and the present day reality of these iconic views, is just very depressing; another example of London rose-tinted lie. 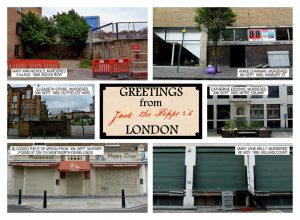 Greetings from Jack the Ripper’s London. Every night hundreds of tourists descend on East London on ‘Jack Ripper Walks’ to view the murder spots. Foggy streets lit by gas lamps, caped figures carrying gladstone bags and chirpy prostitutes all inhabit the lurid tales told by the guides, but of course the reality is different.  All the partisipants seem to forget they are revelling in the abuse and murder of real human beings, or has the passing of time made this okay?

So, for my card I show the actual murder spots on their 125th anniversary with the basic information; a lovely gift for the tourism of death.

The Legacy of the English Landscape. There is nothing more evocative than the illustrations of the British landscape  by Brian Cook, produced for the book publishers Batsford in the first half of the 20th century. At the time they depicted a rose-tinted view of a land that never really was and today it’s even further away! So how about populating these beautiful images with the clutter of today.